Even the best of us needs a roadmap to achieve the goals we set for ourselves, and yes, that road can be foggy. In those times when we lack clarity, we lean on our caregivers, role models, mentors, and Friends to find the road that will spark our passion. Our commitment to being here for the youth we walk alongside for youth 12+ years includes early-on guidance and the creation of Roadmap Goals.

These goals are set by the youth to work on throughout the year with the support of their Friend. Roadmap Goals provide Friends with direction for the types of activities and outings to plan with the youth they serve. The benefit of Roadmap Goals reaches further than just year-to-year; they help build goal setting and achieving into a youth's routine – and that lasts a lifetime.

Taj Wortham was selected from King Elementary and joined the FriendsPDX program in 1999. 80%+ of the youth served by King Elementary qualify for free or reduced lunch, indicating high levels of poverty, and it also has a demographic majority of Black youth. From what Taj remembers about his childhood, both of his parents were holding down full-time jobs. They were (and still are) his biggest supporters, but he spent a lot of time hanging out alone or with friends as a kid. So, when he was selected by FriendsPDX and matched with a professional mentor, he could start counting on getting out of the house and trying new activities on a regular basis.

Around 2006, when Taj was finishing fifth grade and headed into middle school, Darren Linder became his mentor:

Darren was solid from the get-go. He introduced me to film festivals and obscure 80s films. He took me to my first metal concert and passed a lot of his musical knowledge onto me. We bonded over classic rock. One of the best things Darren did for me was to get me out of my comfort zone and explore new things.

We snowboarded on Mt. Hood! That's a classic example of something I wouldn't have done because no one else I knew at the time was doing it. And suddenly I'm going up to Mt. Hood and snowboarding and skiing on weekend excursions with FriendsPDX! Now, these winter pastimes are some of my biggest hobbies. Darren completely changed the trajectory of my life.

By the time Taj graduated from the FriendsPDX program, he had a high school diploma and a deep interest in history, social justice, and international conflict that he wasn't quite sure what to make of at the time. So, he found employment and settled in. But after a couple of years, he realized he was stuck in a pattern he didn't find fulfilling. There were fewer adventures and exciting achievements. It was a monotony of going to work, coming home, going to work, coming home. He and his Friend Darren still talked frequently enough that Darren resumed the discussion of Roadmap Goals. He helped Taj to identify new goals and interests and how to connect these to career aspirations. Eventually, Darren suggested Taj reach out to a friend who worked for American Medical Response. The introduction to a paramilitary style of profession helped expand Taj’s horizons. "Rank, order, and uniforms gave me structure. I was a scatterbrained kid with lots of energy and this gave me a specific outlet to channel everything into."

With this pivot into a demanding career that asked him to commit wholeheartedly, Taj found his place. "The things that have spawned from that single conversation with Darren’s AMR connection really did change my life. I wouldn’t have become an EMT or gone to paramedic school." Last year, Taj worked for the City of Portland as a firefighter. Before that, he was with Gresham Fire Department (FD) for three years using his EMT and paramedic education to serve the city and community. 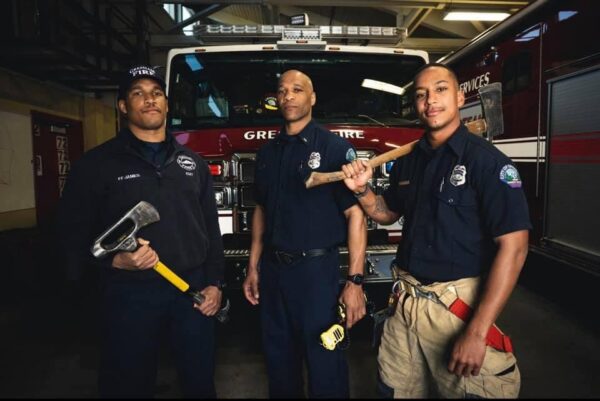 During his time with Gresham FD, he and his colleagues made history. In a storied profession made up of only 8% Black firefighters, Taj and his team became Oregon’s first all-Black engine company. As a history buff, he shares that it was an impactful moment to realize he too could create history.

"I’m incredibly proud to have taken part in it. I got hired with Josh (far left) in 2018 but leaders like Jeffrey Hairston (pictured in the middle), as well as leaders in other neighboring agencies, were paving the way for our generation over the last decade." Taj understands the significance of opening doors for people to follow in his footsteps and continues to serve with pride and honor, albeit in a different role now. 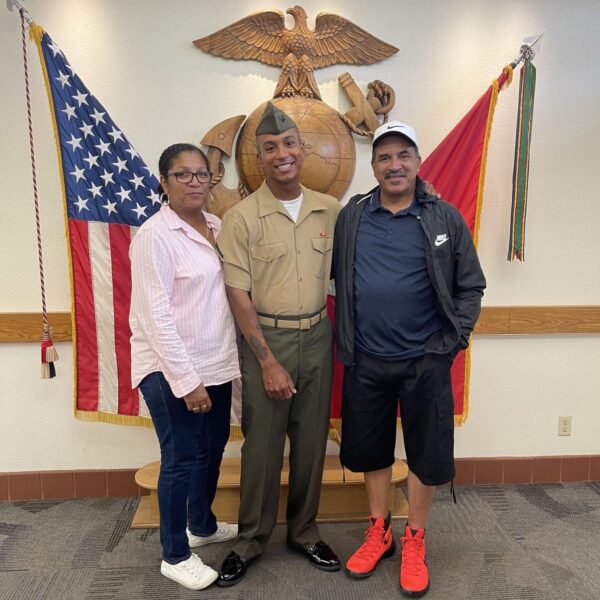 Taj, center, celebrating with his parents

Today, Taj has joined the military. "I made the decision recently and just got done with onboarding and boot camp within the last few weeks. I'm 28. I'm an older recruit, to say the least, but it's always something I've wanted to do and I'm not getting any younger! I'm the best prepared now as I'll ever be." He adds that his fascination with history adds another layer to his "why".

When asked about his future, he's jazzed! He looks forward to progressing through the ranks and the possibility of traveling somewhere snowy. While this year's winter season is out of the question, he excitedly talks about last year when he saved up enough paid time off to treat himself. "Last year, for my birthday I took myself to Colorado. I bought a plane ticket and skied Vail and Breckenridge. I'd never been to either and was told they were great places to go. I made friends there who offered me a place in Steamboat Springs, so now that's on my bucket list. While I was there, my favorite band was playing there too, RÜFÜS DU SOL. They play an electronic mix of upbeat music that feels like summer." It's all about balance. Taj made the most out of his Colorado trip and even connects his love for winter sports to his future in the military, "Maybe I'll get stationed in Japan and get to ski there!"

Providing youth with long-term, intentional, and individual mentorship does not happen without the support of our community. Please consider giving to FriendsPDX today!

Make a donation via Give!Guide today
< Previous Story
Next Story >